Pull Reports™ is happy to announce the 1.3 release. This release adds access control to each level of the report configuration hierarchy. Customize access per user to Catalogs, Reports, Relationships, and Columns. Furthermore, lists of label/values within the Pull Reports™Ad Hoc Creator filter web form may also be customized per user.

The U.S. FWS now uses Pull Reports™ to distribute the Section 7 Consultation Issued Biological Opinions dataset. This important dataset contains information about the U.S. FWS determination regarding the effect of proposed actions on species listed as Threatened or Endangered under the U.S. Endangered Species Act.

Pull Reports™ is happy to announce the 1.2 release. This release adds the ability to define database tables as subqueries within the report export SQL query. Subqueries may be dynamically generated at request time to implement custom query requirements such as row based access control.

Read the full release notes within the 1.2 documentation. 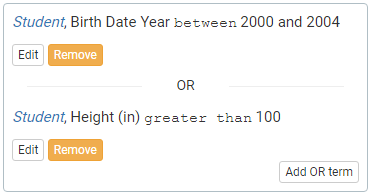 First, filter parameters within the Export Report REST API may now contain OR logic. This enhancement greatly increases the API's flexibility. For example, the following filter parameter from the Pull Reports™ demonstration application finds records by birth year or weight. 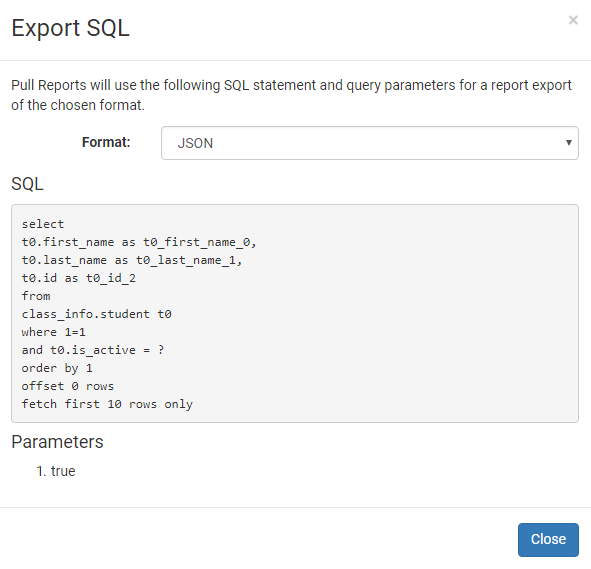 Secondly, release 1.1 adds a SQL button to the Ad Hoc Report Creator Results Preview to allow access to the export report SQL. The SQL functionality is inactive by default for security. However, Pull Reports™ administrators may activate the button via startup configuration properties and control access via the new /pullreports/admin/URL resource path.

Read the full release notes within the 1.1 documentation.

Pull Reports™ is happy to announce the 1.0 release. This release builds on the REST API enhancements of release 0.10 and adds the ability to individually include and reposition columns within the Pull Reports™Ad Hoc Report Creator. Additionally, release 1.0 debuts an upgraded Ad Hoc Report Creator interface with several usability enhancements including a single page design with minimal scrolling, drag and drop interactivity, and full text search of report metadata.

Read the full release notes within the 1.0 documentation. 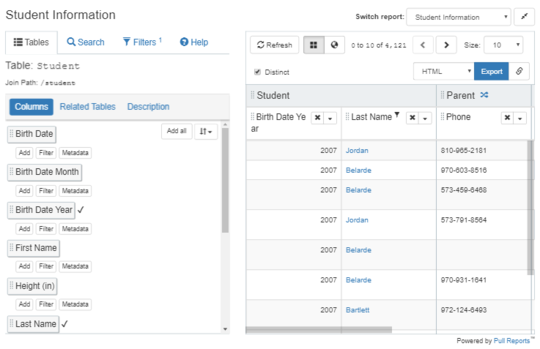 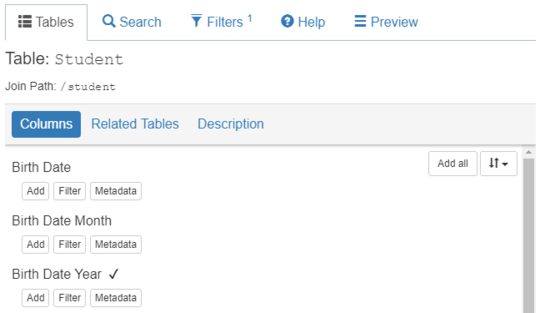 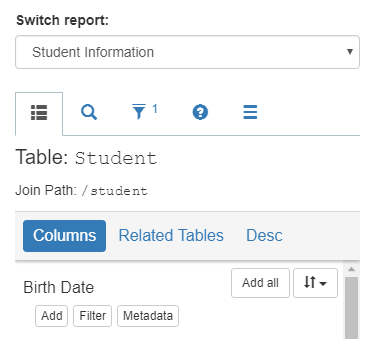 Pull Reports™ is happy to announce the 0.10 release. The highlight of this release is the ability to specify the exact columns to export from the Export Report REST API. Additionally, the 0.10 release includes defect fixes, minor performance enhancements, and better error handling.

Read the full release notes within the 0.10 documentation.

Prior to release 0.10, a client could join all the columns from a table into the export result by specifying the table's path within the columns parameter like so:

In release 0.10, the client may optionally suffix the columns parameter table path(s) with the @ sign followed by one to many column ids. Instead of all columns within the table, Pull Reports™ will only export the given columns in the given order.

In addition to loading XML catalog files from the Java classpath and Java URIs, 0.10 allows dynamic generation of XML from a Java factory class. Create XML catalogs from any remote source such as relational databases and content management systems.

Pull Reports is happy to announce the 0.9 release. The release includes several usability and configuration enhancements. Read the full release notes within the 0.9 documentation.

In addition to defect fixes and minor enhancements, the 0.9 release includes the following highlights:

The improvements include quick-read column lists, the ability for multiple tables to be open at once, and improved indicators for which tables are included within an export.

Release 0.9 allows per report specification of all configuration properties including JNDI Data Source and logging configuration. Additionally, the release supports flexible decoration of HTML exports via Server side includes.

In order to run the example, contact the Pull Reports sales team to receive an evaluation license.

In addition to numerous defect fixes and minor enhancements, the 0.8 release includes the following highlights: